Get Started With Keto Today

Tom Brady is the goat.  His NFL record is one to be reckoned and that’s great.  But today, we will take some time to explore the Tom Brady Avocado Ice Cream recipe to see if it lives up to his top notch record.

If anyone knows anything about Tom Brady, you know that he has an amazing football record. He is known as the touchdown king and makes most of his touchdowns by passing the football.  He has won the Superbowl (6) times.  And that’s great. But it doesn’t have anything to do with ice cream.

Well, one might say that it takes a very disciplined person to muster up this type of physical performance.  True.  You also have to wonder what kind of regime does Brady have to keep him in top notch shape?  Well…let’s see.

The Tom Brady Diet and Routine

According to the man himself his diet is limited.  He eats for performance and for him this means little to no sugar or iodized salt or white flour (or the things that convert to sugar).  His diet consists of mostly vegetables and lean meats.  Brady is early to bed and early to rise.  He likes to wake up at 5:30am everyday.

A couple of years ago he released a very limited edition cookbook, called TB12 and he sold it and sold out of it for $200.00.  The cookbook included 89 recipes, with one of them being the Tom Brady Avocado Ice Cream recipe.  This recipe created quite the buzz.  People all over were recording videos of themselves preparing the ice cream live and doing taste test. This one by Sports Illustrated.  It’s funny as hell. According to these guys his version of Avocado ice cream is disgusting.  Well, duh!  Brady doesn’t eat diary.  His version is more like a chocolate sorbet versus ice cream.

The Brady recipe is as follows:

1. Blend all ingredients in a high-powered blender until smooth.

2. Put mixture in freezer until ice cream reaches desire thickness. (For quicker ice cream, freeze half of the water into ice cubes before blending.)

3. Scoop ice cream into four dishes and serve with your choice of topping.

The REMIX of the recipe is more like this:

Blend everything together (except pecans), then pour mixture and freeze.

Take some time out to give it a try and let us know how you like it.

Keto Hair Growth? Discover after I loss some, how I grew it back...

What's the Difference Between Paleo and Keto Diets?

How to Calculate Net Carbs for Keto Diet 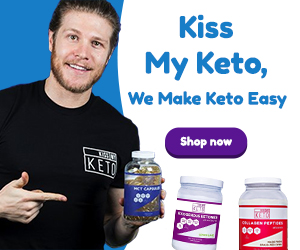